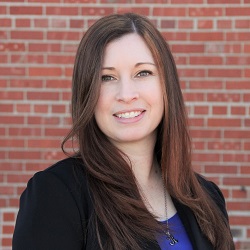 McElroy has been serving as interim city manager since the retirement of Bob Myers at the end of last year. She has been Newton’s assistant city manager/development director since October 2016.

“Commissioners, City staff, and community members who have worked with Kelly during her time in Newton know her to be knowledgeable, committed and trustworthy,” Koehn said. “During this time of unprecedented challenges, Newton is fortunate to have Kelly leading our City organization.”

Last fall, the City had hired Strategic Government Resources (SGR) to assist in the recruitment and selection of the next city manager. In February, the City Commission made a conditional offer to a candidate who later withdrew from consideration for family-related reasons. The Commission at that time put the search on hold, intending to wait until after the 2021 budget process. But in May, Commissioners approached McElroy about taking on the position permanently.

“I’m grateful for the opportunity and the faith that the Commission has placed in me,” McElroy said. “We have an outstanding team here in Newton, and I look forward to continuing to work together to serve the community.”

The Commission and staff will be re-evaluating the development director position and responsibilities, and in the meantime, McElroy will continue to fulfill those duties.

McElroy came to Newton from the City of Goddard, where she was director of community development/zoning administrator. She previously served as executive director of the Regional Economic Area Partnership (REAP) and as director of administrative services for the Workforce Alliance of South Central Kansas. Before that, she worked for the City of Edmond, Oklahoma.