Thank you for participating in the 2020 Newton community survey! The survey is being used to gather input from residents on various topics, including housing needs, a new library, the future of the municipal swimming pool, and other community development issues. Questions for the survey were created and approved by City staff and volunteer members of the Community Survey Steering Committee. Wichita State University was hired by the City to carry out the survey and collect and analyze the survey results. The survey was mailed to all Newton utility customer households.

Please return your survey by mail by Feb. 29. Survey results will be available around the end of April.

In 2017, the Newton City Commission decided that building a new police station to address space and safety concerns would be too expensive for the community to bear. Instead, the City and Harvey County developed a partnership project to remodel the existing Law Enforcement Center at 120 E. 7th St.

It’s estimated that the renovation plan, which was recommended by a volunteer citizen task force, will meet the needs of the Police Department for the next seven to 10 years by making more efficient use of space, relocating some operations, and collaborating with the Sheriff’s Office on some joint uses. For example, the space at the back of the west side of the building that had been used as evidence storage is now an office housing the new joint Drug Task Force.

In 2016, the City completed a $20 million upgrade at the Wastewater Treatment Plant, which replaced many of the structures at the sewer plant and significantly updated the plant’s technology. Need for the improvements was spurred by three factors:

The construction was financed by a low-interest loan from the Kansas Department of Health and Environment, paid for by a 38% surcharge on sewer fees. The loan is scheduled to be paid off in 2026, after which the surcharge will be eliminated. 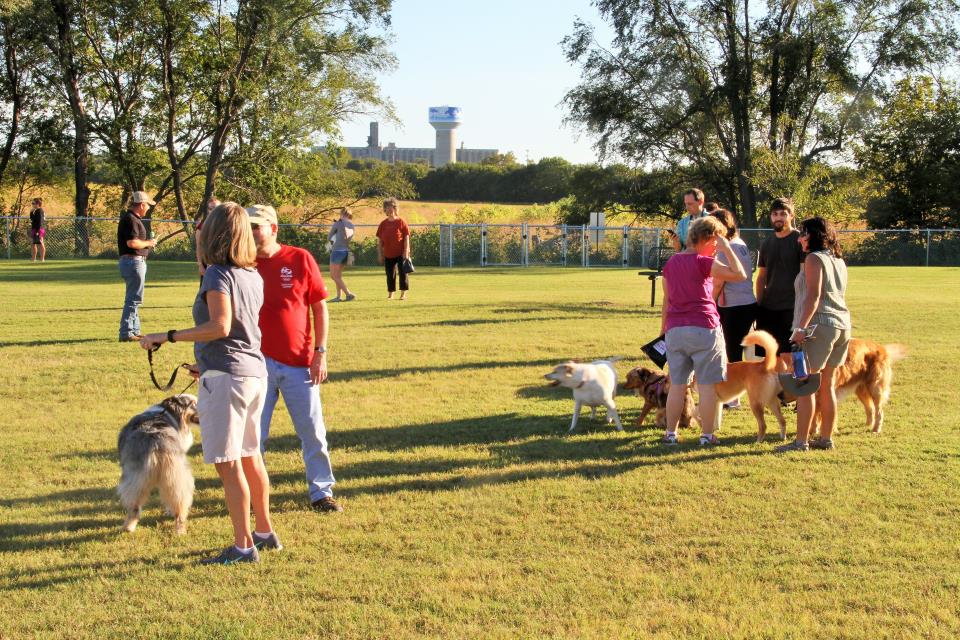 The public dog park at Centennial Park opened in 2016 as a partnership between the City of Newton, Rotary Club, Caring Hands Humane Society, and Newton Dog Park Project. The City provided 2.1 acres of land, installation of water lines for human and dog fountains, installation of fencing, trees, trash cans and “doggie pots,” and ongoing maintenance of the park. Rotary Club and Newton Dog Park Project/Caring Hands each agreed to provide funding of half the cost of the fencing materials. Supporters of the dog park continue to raise funds for canine agility equipment, benches, and other amenities.

In 2011, Newton opened its third Fire/EMS Station at 2520 S. Kansas Ave. The station’s construction was partially funded by a $2.9 million grant from the Fire Station Construction Grant Program, part of the American Recovery and Reinvestment Act. Newton was the only grant recipient from Kansas. The total cost of the new station was about $3.6 million.

The 12,723-square-foot station has a two-bay drive-through apparatus bay and can house four to eight firefighters with full living quarters. The City received Silver Level LEED certification for the new station, and a number of “green” design elements were incorporated.

The City updated its Housing Study and Needs Assessment in 2019, which found a significant lack and shortage of housing of all types in the community, but especially called out the need for additional senior housing (geared toward those age 55+), and income-based or subsidized housing. Although the City itself cannot provide housing, there are steps the City can take to encourage development of new housing or promote improvement of existing housing in the community.

Newton Baseball Club and other users of Newton’s athletic fields have been speaking out the past few years about the need for additional ballfields, both for local teams and for tournaments. Many other communities in Kansas have sports complexes capable of hosting large-scale tournaments that bring hundreds of families into town.

We also have a municipal swimming pool that is fast approaching the end of its lifespan. Some major maintenance will be needed soon, which begs the question: Should the pool simply be maintained as it is, or should the City invest in improvements or expansion? Both a pool and ballfields are the kind of amenities that young families look for in a community.

The City and the library are currently are working with HBM Architects to plan and design a new public library. The project will be accomplished in phases:

Phase 1 is complete – The City Commission selected Military Park (the library’s current location) as the best site for a new library. Phases 2 and 3 are about to begin. The plan is that funding for construction will come from both City dollars and private fundraising.